We start out this weeks episode with a special bonus segment. If you listened last week, you may recall a little idea we had about Mountain Dew Jello. Well, that is no longer just an idea, we made it happen, and it was good! We think there still needs to be some tweaking, but we’ll be publishing the recipe soon!

Also on this weeks episode we discuss some movies we watched (Lego Movie, Monuments Men), we watch the new trailer for Zombeavers, and Josh shares some pooping stories.

On this weeks episode of the Intermission Podcast:

First up, we try our Mountain Dew Jello. I think we all came to an agreement that the plain, straight Mountain Dew and gelatin was the best, but next time we want to try it with Mountain Dew concentrate. So, whoever wants to send us some….

Right out of the gate, Josh throws down this awesome new trailer for Zombeavers! I don’t want to start sounding like Corey, but it looks really awesome! No matter how awesome Zombeavers looks though, we are still expecting a straight to DVD/TV release, possibly SyFy. 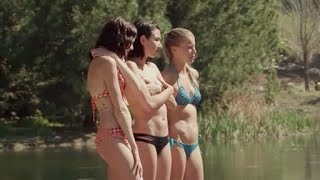 Hey there Intermission Podcast fans! We're back to entertain you yet again, with Episode 23 of the Intermission Podcast. We start out this weeks episode with a special bonus segment. If you listened last week, you may recall a little idea we had about Mountain Dew Jello. Well, that is no longer just

It’s hard to follow something like Zombeavers, but Corey announces that Big Willie himself (Will Smith) will not be participating in an Independence Day Sequel. It’s speculated that it is all about money, but who knows. While we are talking about Independence Day 2 and MIB 4, Guy get’s really patriotic. Not trying to make light of his patriotism, but it was hilarious!

For the most part we aren’t huge sports fans at the Intermission Podcast, but where would we be if we didn’t at least mention the Olympics? Or as Josh calls it, figure skating. We speculate that the women’s hockey players wear face cages to help keep them pretty.

After Josh scheduled a group outing for us to go and watch the Lego Movie, only 3/4 of us showed up. Guess who missed out, Josh! Yeah, we’re pretty steamed too! Our viewing was only a 2-D show, and we don’t normally say this, but we think it was probably worthy of a 3D ticket.

Some voices to listen for in the Lego Movie:

Craig and Josh went and watched Monuments Men without Guy and Corey. They weren’t very happy because they really wanted to see it. They both really liked the film, but Craig really liked the fact that John Goodman didn’t ruin it. The film was also based on a true story, which makes us wonder, exactly how much of it was really true?

Unfortunately for our listeners we do tell some toilet stories this week. Yeah, we know, it’s pretty gross. But hey, it’s pretty funny and was bound to happen eventually.