You are here: Home / Movie News / “He is Here” Commercial update: The Strain (Super Bowl Spot)

Superbowl! Yeah! Right guys? Right? Ok. I’ll admit it. I’m not a huge sports fan. Heck, I watched the Superbowl, and I’m not 100% sure I could even tell you the teams that played. The Seattle Warbirds vs. the Colorado Ford Mustangs maybe? That sounds right. Honestly, the highlights of the Superbowl for this Movieguy are the commercials. There was one commercial in particular that caught my eye this year. It included the phrase “He is Here”. Some of you might recall a while back I wrote about a mysterious commercial that aired during an episode of The Walking Dead. Well, looks like we’ve got an answer to the question “What the H-E double hockey sticks were that all about?”

We started with a short commercial with a shot of the New York skyline on a sunny day, showing a full solar eclipse. As a science nerd, I would like to point out the fact that a full solar eclipse would take much longer than 6 seconds. However, I totally understand that Superbowl commercials cost a bazillion dollars a second so that inaccuracy is forgiven. After that, the phrase “He is Here” shows up in front of a bio-hazard type symbol, and then “The Strain, Summer.” 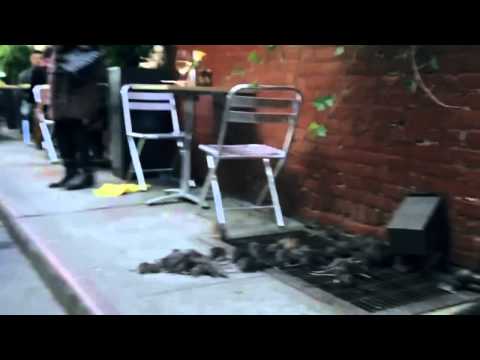 The Strain – He is Here

Then, at the end of the 2-minute warning commercial break in the second quarter, another teaser that I can only assume was for The Strain. A few seconds of footage, flames in the foreground with people running in the background screaming. No text other than the FOX logo in the corner of the screen. And then there’s also this beep….beep of a timer counting down. Where have I heard that before?

Crap. So that teaser is clearly for The FOX series, 24. So scratch that one.

Son of a…….so it looks like a couple of the other commercials I thought might be for The Strain had the signature “beep-beep” of the 24 timers in the background……

Ok. I guess there was only one real commercial for the new FX series, The Strain during the Superbowl. I guess that’s what happens when you have a house full of people yakking about football while you’re trying to watch Superbowl commercials. So that solves the mystery of what this “He is Here” rat commercial was. But it doesn’t fully explain the rats.

The Strain is a high concept thriller that tells the story of Dr. Ephraim Goodweather (Corey Stoll), the head of the Center for Disease Control Canary Team in New York City. He and his team are called upon to investigate a mysterious viral outbreak with hallmarks of an ancient and evil strain of vampirism. As the strain spreads, Eph, his team, and an assembly of everyday New Yorkers, wage war for the fate of humanity itself.

Looks like The Strain is will be continuing the fairly recent vampire craze, and I swear if it’s about pussy sparkly vampires I’m gonna quit. From what I gather from the official FX website, The Strain is a series based on a trilogy of books of the same name, written by the man that will be directing the TV series, Guillermo Del Torro. If you’re a reader, you can grab The Strain in book form Amazon. Will read the book spoil the series? Most likely yes. So, um, don’t read the book if you don’t want the show spoiled?

I really like the concept of vampirism being something similar to a zombie virus. With several months till the premier, I might read the books to see if the TV series will be as interesting as the commercials are letting on. Oh, and maybe I’ll find out who “He” is, and why he’s here.