You are here: Home / Featured / Cowboys and Aliens Preview/Plot Prediction

I heard rumors about Cowboys and Aliens back in the spring, and I chalked it up to just that, rumors. Even if there was a movie made about cowboys and aliens, how good could it be? I mean, come on. Aliens have lasers and death rays and space ships.

Cowboys have the Peace Maker. Now granted, the Peace Maker is a fine weapon for shootin’ some injuns or horse thieves, but these are aliens we’re talking about here. So unless you’re Will Smith or Sigourney Weaver, I’m betting this is going to be a one-sided fight.

Well, I’ll gat darned if I weren’t perusing the internet the other day, and there it was. A preview of this sure to flop idea of a movie, Cowboys, and Aliens. Ladies and Gentlemen, I am not one to give in and admit when I’m wrong. Oh, boy was I wrong. This movie looks awesome!! Have a look see. 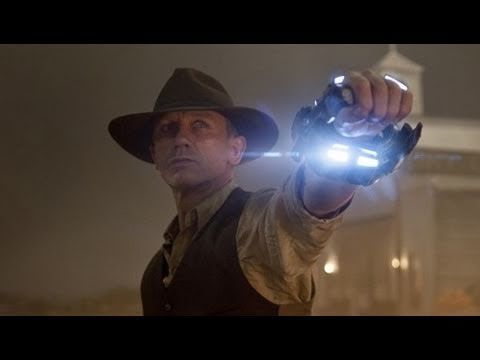 I’ll try, to sum up, what I’m pretty sure it is gonna be about.

OK, so James Bond wakes up out in the dessert with no memory of how he got there or who he is. I predict abducted by aliens and memory erased or some sort of alien bounty hunter/body snatcher that hit his head. He kills the posse that is looking for him and heads into the nearest town where he promptly gets picked up by the local sheriff, Indiana Jones. While he is in the jail, these aliens come looking for him because he has their sweet laser bracelet. After a stray laser beam frees him from his cell, he accidentally shoots a UFO down, and everyone is all like “Whoa! How did you do that? Do it again!” James Bond and Indiana Jones team up and shoot down a few more UFO’s and eventually Bond gets his memory back. The end.

Yep. That’s what it’s gonna be about. If anyone else thinks it might be different, leave a comment, and I’ll tell you why you’re wrong. I can’t wait to see this movie. It’s got some heavy hitters. Starring Harrison Ford and Daniel Craig, and produced by Jon Favreau with help from Steven Speilberg and Ron Howard, I predict this to be THE movie of next summer.