Every week here at Movie Guys we get several movies in our inbox. Most of them don’t peak our interests enough to watch. Then I spot this subject line; “Inappropriate Behavior – Sensitivity Training.” I immediately assumed that the intern had filed a formal complaint against one of our staff members, but it turns out it was just a promo for a movie called Sensitivity Training. Whew, we dodged the bullet on that one.

They obviously had my attention with Sensitivity Training, but I still wasn’t willing to jump in head first. We get a lot of crap here at Movie Guys, so it had to pass our vigorous pre-screening first. So I took the first step and watched the trailer. 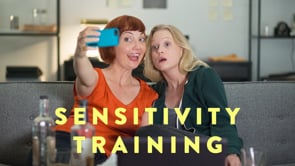 Whoa. This chick is just like me! Anna Lise Phillips plays Serena, a blunt microbiologist that doesn’t know how to be social. She absolutely loses it when people talk in movie theaters and her co-workers think shes the worst. Her harsh personality ultimately leads to her being assigned a polar opposite, sensitivity coach.

I don’t normally give much credit to movies in our email box, but Sensitivity Training was fantastic! It’s quirky style of comedy was perfect for me, and it had just the right touch of seriousness. It really had everything. Comedy, love, death, inappropriate behavior. Yep. Everything.

For the most part, you will not recognize any of the cast, and this isn’t a bad thing.The one face you may recognize is Jill E. Alexander who played the sensitivity coach, Caroline. Jill Alexander was in the HBO series Silicon Valley. They are all excellent actors and you don’t get that stink of cheesiness that you get from some other indie flicks **cough** The Room **cough**.

The only thing I really didn’t like about Sensitivity Training was the ending. I won’t give it away, but it just wasn’t a solid, definite ending. I prefer pretty clear resolution at the end of a movie, and I still had some questions when it ended. Was it abrupt enough to ruin the movie for me? Not at all, it’s just the one piece that I would like to see differently.

Should you watch Sensitivity Training?

Sensitivity Training has the makings of an indie classic. If you like a different, harsh kind of humor, then don’t pass up Sensitivity Training. I was really surprised by this one, and would definitely recommend giving it a watch. Now here’s the catch.

Where can you watch Sensitivity Training?

You can watch Sensitivity Training on Amazon.

I want to add, I had a really hard time finding this for purchase. “Sensitivity training” is a pretty hot topic, and very few of the results I found had anything to do with the movie. Now I keep getting ads for sensitivity training firms.

Netflix's Lost in Space Remake T...
What is a Parsec? The Truth Abou...