As I was partaking in my favorite television series (The Simpsons) this evening, I caught a glimpse of an ad for a new animated series coming to Fox, Napoleon Dynamite. Being a fan of animated comedies, I headed straight to the interwebs (after The Simpsons of course) to find out more about this adaptation.

I was surprised to find out that it was actually being voiced by the original cast and not just a group of people that sound “close” to the original characters.

Based on the hit film, NAPOLEON DYNAMITE is an animated series that follows the continuing adventures of America’s most awesome awkward teenager and his quirky family and friends as they struggle to navigate small-town life in rural Idaho.

The original cast from the film – Jon Heder, Aaron Ruell, Efren Ramirez, Tina Majorino, Sandy Martin, Jon Gries and Diedrich Bader – will voice their characters in the series, and many new characters will be added along the way.

And it doesn’t stop at the main characters. There are several other big names that will be doing guest voices on the show.

The fun doesn’t stop there, though. The executive producers were involved in the original film, and you can’t go wrong with Mike Skully (who has written several episodes of The Simpsons) as the writer/producer.

We will have to wait until January to know exactly how this show will turn out, but I think that Fox has set themselves up for success on this one. I never expected Napoleon Dynamite to become a TV series, but the concept seems like a really good idea to me. It would never have made it as a sequel, and I can’t see a live-action TV adaptation working, but for some odd reason, an animated series just seems like it will work.

So here’s my prediction: Napoleon Dynamite’s premiere will have a fairly decent draw. After a few episodes, it will build some steam and start to show some real numbers. Jonah Hill’s abomination Allen Gregory will be canceled, giving Napoleon Dynamite the animated series a prime spot between The Simpsons, and Family Guy. The only thing I haven’t figured out is when will Bob’s Burgers come back into the line-up?

And finally, I leave you with the trailer for Napoleon Dynamite the animated series. Sound off in the comments and let me know what your opinion on the new series is! 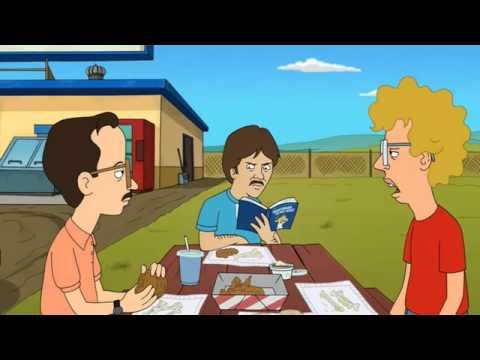 Harry Potter and the Deathly Hal...
Titanic 3-D Trailer... Why?