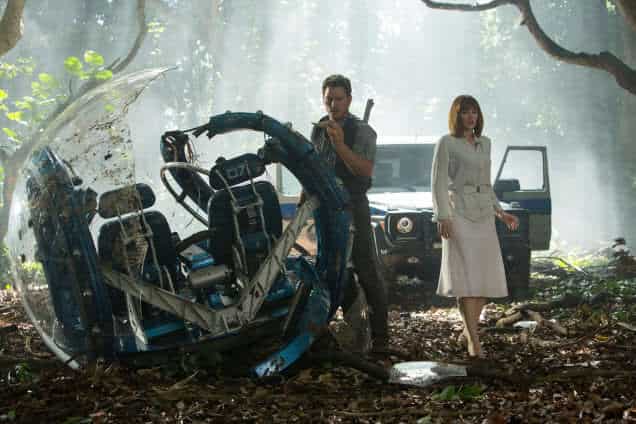 Jurassic World is the newest addition to the much loved dinosaur franchise and is produced by Steven Spielberg and directed by newcomer Colin Trevorrow.

The film takes place 22 years after the events of Jurassic Park, Isla Nublar and now features a full functioning dinosaur theme park, Jurassic World as envisioned by John Hammond. After the 10 years of operation and a recent decline in visitor rates the corporation behind the park create a new attraction to re-spark visitors interest, which backfires horribly.

Jurassic World takes you back 22 years ago to memories of seeing Jurassic Park for the first time its filled with memorable and nostalgic moments that include the John Williams score this time composed by Michael Giacchnio, as well as a bigger role for Dr Henry Wu [BD Wong] this time round.

With Dr Grant and Ian Malcolm absent, the protagonist this time round is Chris Pratt’s Owen a dinosaur expert and raptor trainer. Chris Pratt channels his character Owen with a mix of Indiana Jones and Steve McQueen and if Star Lord was Pratt’s Han Solo then Owen is his Indiana Jones.

Bryce Dallas Howard stars as  “Clair” the tightly wound chief executive of the park who arguably goes through the biggest transformation in the movie from uptight workaholic [who can’t even tell how old her nephews are] to badass heroine.

The children in peril this time round which is classic Spielberg, are brothers are Zack and Gray [Nick Robinson and Ty Simpkins], who bring back memories of the first movie and both are likeable and vulnerable. They are going through family problems and are different ages and are at different stages in their life.

Jurassic World features some thrilling dinosaur action and by far the biggest kill count than all three movies put together. When the running and screaming finally starts you remember why you fell in love with Jurassic Park in the first place.  One sequence in particular is the Gyrosphere ride where Zack and Gray come face-to-face with the “genetically modified hybrid” the “Indominus Rex”.

Also another positive about Jurassic World are the visual effects which are created by Industrial Light and Magic are impressive and the movie also uses practical effects throughout the movie.

Jurassic World ticks most of the boxes but does lack some character development in the script for example Vincent D’Onofrio’s “Hoskins”, is underwritten and needed more development and some of the dialogue needed some finer tuning.

Overall, Jurassic World is a thrilling and action-packed return to the most famous theme park in movie history. It offers some fun references to the “Jurassic Park” that will satisfy fans as well as taking the movie places where the franchise hasn’t gone before.