You are here: Home / Movie News / Walking Dead Rat Commercial – “He is Here”

Update: We have now found out that this commercial is definitely for the upcoming FX series The Strain. During the Super Bowl we saw a trailer for The Strain shot in the same style, featuring the same rats, and the same words “He is Here.” I think it is safe to assume that anything “He is Here” related can now be linked to The Strain. We’ve also seen He is Here commercials on FX, Comedy Central, Spike, and the History Channel.

On Sunday, fans of The Walking Dead were treated to an unusual first look at……well, something.  If you watched the first showing of The Walking Dead (not the encore presentation) you probably saw it. It was during the second or third commercial break, sandwiched between a trailer for Lone Survivor and a Victoria’s Secret commercial. You might not have even noticed or paid any attention. If you record the show to watch later like I do, you definitely skipped over it. I got lucky and caught a glimpse of the Lone Survivor trailer and went back to watch it, then this weird commercial caught my interest.

Here’s the video of The Walking Dead rat video: 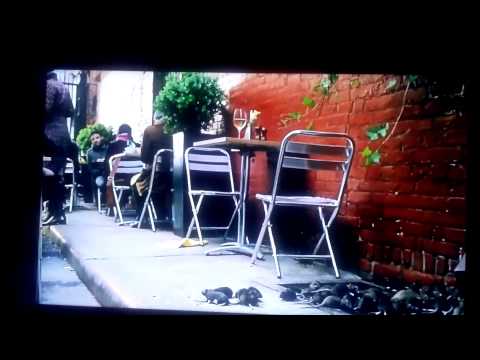 Now let’s head over to the sports desk for the play by play!

Fade in: We are watching footage from a cell phone. There is a woman sitting across the table from us at a sidewalk cafe. She is holding a glass of wine, a 2003 zinfandel I believe. She is posing awkwardly as the gentleman holding this cell phone prepares to take a photo. A UPS truck drives by in the background, 10 minutes behind on the days deliveries. Suddenly, the phone operator notices something on the ground and we pan down to see a pile of rats crawling into/out of a sidewalk grate. Mild panic ensues. Cut to black.

So what did you think? I bet you missed it, didn’t you?! I had to rewind it myself and go frame by frame. It was in the quick black spot between scenes. The words “He Is Here” flash very quickly.

Now for the questions. Who is “He”, and why is he here? What affiliation does he have with rats? Are the rats trying to escape? Why was the UPS truck the only thing that was recognizable? Why did it seem like the first pile of rats just appeared? I mean, there was someone sitting at the table a couple feet away facing these rats and didn’t notice them? Poppycock. These rats were clearly teleported.

What is this commercial all about? Is it for a new movie? TV show? Maybe it was a subliminal commercial for UPS? What can brown do for you? Teleport a pile of rats anywhere in the world and make you brown your pants, that’s what. Hopefully, it’s just the first installment of some sort of viral marketing campaign, which ironically, I discuss with some of the other Movieguys in this weeks episode of the Intermission podcast.

Let’s hear some of your guesses folks! What do you think it is? Could it be for the new Godzilla movie? Or perhaps the new show on FX called, The Strain? Maybe you’re thinking back to Cloverfield and hoping for a Cloverfield 2 (keep hoping). What do you want it to be? Maybe you already know! Comment below!