You are here: Home / Movie Reviews / Comedy / The Game Plan 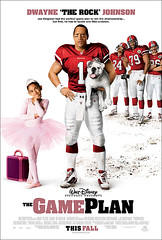 The Rock is back in theatres with his new movie The Game Plan, but this time he isn’t kicking some “bad guy’s” ass. He’s a quarterback on the Boston Rebels, a professional football team. His name is Joe Kingman,Ã‚Â a.k.a. “King”,Ã‚Â and he’s the number one quarterback in America and he’s also really full of himself.Ã‚Â To him football is the number one thing in his life.Ã‚Â Little does he know, but he has an 8 year old daughter and she surprises him on his doorstep telling him that she’ll be staying with him for the next month. HeÃ‚Â goesÃ‚Â from hosting football parties and learning the playbookÃ‚Â to hosting tea parties and learning ballet. Now King has to learn how to be a father and make his daughter the number one in his life.

I found this movie to be delightful and quite a surprise. The Rock has impressed me as somewhat of a versatile actor. He took on a role in which I reallyÃ‚Â never could see him play in a million years. King was the macho type Rock person that we could typically expect but the sesitive, more comedic Rock was a pleasant experience. The little girl who played his daughter was very cute and was perfect for her part. King and her had a very interesting dynamic that was enjoyable to watch grow and mature throughout the whole movie. The rest of the cast added some great humor and I found several parts of the movie very funny.

In conclusion, I think this movie was fun and a great movie for the whole family. With all the violent and crazy raw humorous movies that have come out all summer, this was one that I can say was enjoyable even without all that outrageous stuff in it. So definitely feel free to go check this movie out with your kids, girlfriend, wife, husband,Ã‚Â or anyone else who’s up for a good wholesome comedy.