Plot Synopsis:  Self-control, perseverance, integrity, indomitable spirit – that’s what it’s supposed to be all about at the Concord Tae Kwon Do Studio, where boys are turned into black-belts and suburbanites are chiseled into great warriors under the watchful tutelage of proud sensei Fred Simmons – until Fred discovers his wife has been unfaithful and instantly descends into a blubbering mess. OK, so maybe Fred is far more blowhard than kick-ass hero. But when he sets out on a last-ditch quest to meet his kung-fu idol — the star of the “Seven Rings of Pain” trilogy, Chuck “The Truck” Wallace – Fred goes on a wild journey that will take him from egomaniacal bluster all to the way to becoming the stand-up man of his delusional dreams.

Check out the trailer! 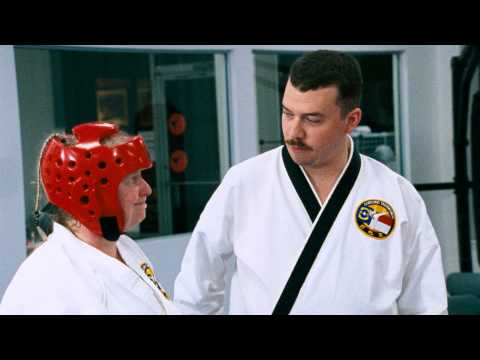 One of the fastest rising stars in the comedy genre lately has been Danny McBride, and deservingly so.  His hilarious appearances in high-profile comedies like Pineapple Express, Fanboys, Observe and Report, Tropic Thunder and Superbad have launched him into stardom.  You may not know the name, but I you’d surely recognize his face, then laugh.  He struck up a friendship with Will Ferrel and his buddy/business partner Adam McKay, who only served to speedup his ascension in the industry.  The two saw McBride’s indie comedy and fell in love with it’s “unique” style of humor, and helped market it to a larger audience.  If you’ve seen The Foot Fist Way, you probably have Ferrell and McKay for that; I know I do.  Without them, I would never have gotten the opportunity to check out The Foot Fist Way, a film that was easily one of the funniest films I’ve seen in recent years.  It was made back in 2006, but was given a wide release on DVD in 2008, and made it into my top ten list of films from that year.  I went back to watch it again today, and in doing so I realized that we have no official review of the film here.  Since I am all about spreading the good word for films I feel don’t receive proper credit, I chose to review it now in the hopes that at least a few people will pick it up and find the same enjoyment I did.

The Foot Fist Way is an unconventional comedy about loser, “trailer trash” karate instructor with a failing marriage and an obsession over a famed Karate icon.  When I say “unconventional,” I mean that this film is definitely not for everyone.  There is such a unique and distinct style of humor in this film; it’s very hard to quantify.  I would call it a mix of deadpan humor and uncomfortable or “I can’t believe that just happened” moments.  It really is quite brilliant.  I mentioned that Will Ferrell and Adam McKay were involved with re-shooting and distributing the film, but don’t let that fool you.  This is not what you would expect from a Ferrell/McKay film.  They clearly allowed the film to stay what it was before their involvement began.  I’m glad they did, because Foot Fist is one of the most unique comedies I’d seen in a while.  If you need a reference point, and I’m sure that you probably do (even I would be confused by my description – watch the film and it’ll make sense), I’d say the closest thing to this film in terms of style of humor would be Andy Samberg’s Hot Rod.

Aside from the style of humor, there is plenty of classic comedic acting in this film for all you comedy buffs to appreciate.  Danny McBride was hilarious as Fred Simmons – A clueless, pathetic and hapless loser of a Karate instructor with a creepy obsession of his “Chuck Norris-esque” hero Chuck “The Truck” Wallace.  While McBride has been almost chameleon-esque in his performances, taking on many different roles, he is right at home playing Fred Simmons.  He just doesn’t get it; he has a hard time seeing what is really going on in the world around him.  90% of the humor of the film revolved around his blissful naivete and his idiotic blundering, and that was fine with me.  Supporting roles were cast well, and together, the cast of the project fit well together and had great chemistry.  The characters were very stereotypical, and exactly what you would expect them to be after reading their character descriptions.  While I am usually the first one to bash anything in Hollywood that lacks creativity, in this film it works.  I wouldn’t have wanted to see a new take on a trailer-trash slut wife (pardon my french), I loved the picture perfect image of the typical Jerry Springer guest.  Finally, to flesh out the film a little more, Simmons’ class was filled with a whole array of different students – most of which you would NOT expect to be in a karate course.  They are all good for at least a laugh or an “I can’t believe he just did that” moment.

I really enjoyed The Foot Fist Way for all the reasons I would’ve never suspected I would love it for.  It was far from low-brow:  This a unique comedy that comes around only once in a while, featuring a great blend of deadpan stupidity and blissful ignorance.   I said it before, and I’ll say it again – This one is not for everyone.  But if you are a comedy buff, or if you like your comedy a little out there or off the wall, you should try to find this.  It was really one of a kind.  The Foot Fist Wayis a fine comedy to add to your DVD collection, and for you extras buffs there are a whole host of great features consisting of the typical fare – the outtakes, the deleted scenes, and a hilarious new ending.  All of the features on this film are typically the features you find on DVD’s that don’t have much to offer, but for a hilarious film that packs as many laughs as it possibly could, you have to wonder how great the deleted scenes and outtakes were on The Foot Fist Way. I can honestly say that this is buy, buy, buy!  Go out and get yourself a copy.  You won’t regret it!