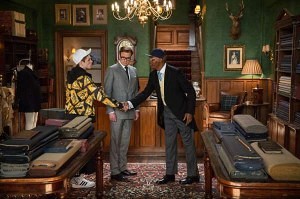 Kingsman the Secret Service is the new comic book action thriller from Matthew Vaughn [Kick-Ass] and stars Colin Firth as legendary spy “Harry Hart” a.k.a Galahad who works for a secret intelligence agency that recruits an unrefined, but promising street kid with potential into the agency’s highly competitive training program to stop a global threat that emerges from a twisted tech genius.

Kingsman the Secret Service, has the same after effect of Kick-Ass, the feel-good factor and coming of age story. Taron Egerton impresses as “Eggsy” a good natured but ending up on the wrong side of the tracks street kid who has family issues involving his abusive step-dad, he gets into trouble with the police and results to stealing and crime.

Colin Firth has reinvented himself as a action-hero, just like Liam Neeson did with Taken, Firth displays comic humor with bursts of visceral action.  One standout scene sees Harry take out a gang of thugs in a pub only armed with an umbrella it is thrilling and as it is jaw dropping you just don’t expect it.

Samuel L.  Jackson plays the twisted tech genius “Valentine” who Harry and Eggsy have to infiltrate and stop. Jackson plays Valentine with a geeky persona who has a hatred for violence and a lisp who stops at nothing to conquer world domination.

The star of the show has to be Valentine’s hench-woman “Gazelle” who is armed with razor blade legs that cut her adversaries in half. She would be a James Bond writers dream.

Mark Strong plays “Merlin” who is like “Q” in the Bond movies as is the lead of the training program as well as in charge of creating the gadgets and he is paying a good guy for once in one of Vaughn’s films.  Michael Caine also shows up as the head of the agency “Arthur”.

Kingsman the Secret Service is the most fun spy movie to date and is what James Bond should be, filled with larger than life characters, crazy expensive gadgets, thrilling action scenes, exotic locations and a hero you can route for.

Even though Kingsman the Secret Service may look and sound fun, its not a spy movie for kids. It displays some graphic violence, and one scene sees “Harry” having a standoff at a church that displays some ultra-violence that reminds you that are watching a movie from the director of Kick-Ass. Vaughn pulls no punches as he displays in your face violence that isn’t for the faint hearted.

Overall. Kingsman the Secret Service is at ion-filled escapist fun for fans of the James Bond movies and spy movies alike as boasts career defining turn for Colin Firth and a impressive performance from Taron Egerton that should put him on the map for stardom.