I’m not gonna lie, I was a little let down when I first saw this trailer. I have been incredibly busy lately and haven’t been keeping up with movie news, and when this trailer first started rolling, my first thought was, “OMG OMG OMG! Ghost Rider 2!” About 5 seconds later I realized that this was most definitely not Ghost Rider 2. After putting my disappointed aside, I realized that Drive Angry looked like an awesome film! 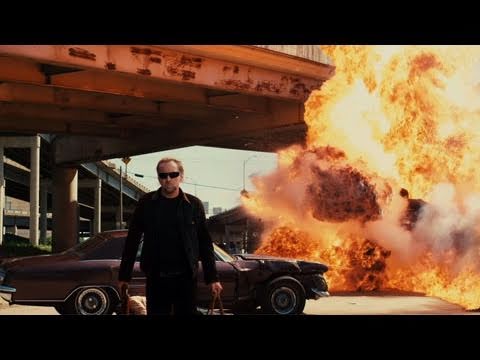 My very first thought about the film, it is a mix of Ghost Rider and Gone in 60 Seconds. Both of which are awesome films. But almost immediately MovieGuy Josh pointed out one thing that I had failed to notice. Towards the end of the trailer, it mentions “From the creators of My Bloody Valentine 3-D.” That is enough to put me off a little bit, especially with Cage’s ups and downs.

The other thing that puts me off a little bit is in the title itself, Drive Angry 3D. I am one of the few people out there that isn’t sold on 3D yet. I think it is cool for amusement parks, and kids films, but I am still not convinced that I like it. I will admit though, the more 3D films I watch the more I am accepting it, I’m just not sure that it is right for every film out there.

On the plus side though, Drive Angry looks like a solid action flick. It looks to have ample explosions, some awesome cars, one bad-ass gun, and a hot chick. What more could you ask for? 2 hot chicks? My conclusion, I will give the film a 7/10 based on the trailer.