David Carradine, best known for his role as Caine in Kung Fu, has tragically passed on at the age of 72.  The exact nature of the incident is unknown at this time, but initial reports are bizarre.  The story right now is that Carradine was found by a maid in a hotel room in Bangkok, Thailand, hanging naked in the closet.  They are calling this a suicide at this moment.  Honestly, I have no idea as to why he would go to Bangkok to commit suicide, and more importantly, why he would hang himself while still in the buff.  I don’t want to say anything disrespectful at this time, as I was a huge fan of his work, but something about this story just doesn’t feel right.  Carradine has kept busy despite his old age, making regular, albeit small, appearances in several films each year over the last 5 years.  Whatever the case may be, it is truly a tragedy, and I hope that whatever it is that happened, two things will come of this:  1).  The truth, whatever that may be, comes out 2). That people do not remember him for the circumstances of his death, but for the successes of his life.  Everyone deserves to be remembered that way, even celebrities.

As I mentioned earlier, I am a huge fan of Carradine’s work, spanning the entire course of his career.  Most people will remember him for his legendary performance as the wise and ethereal Kung Fu master, Kwai Chang Caine, and I will certainly remember his performances as such.  He made a career out of the character, and you’ve got to respect that.  But the thing that sticks with me the most is his humble persona and his ability to enjoy mocking the legendary character that made him famous.  Carradine never had a problem playing any sort of spoof of Kwai Chang Caine and seemed to have as much fun doing that as he did playing the serious character.  He had such a great sense of humor.  What many people probably don’t know is that Carradine actually had a good range as an actor, with parts in a variety of different films, from westerns to comedies to Disney movies.

A special nod has to go out to Quinten Tarantino for giving Carradine a shot to play the unforgettable villain of his two-part epic Kill Bill.  It truly was a performance that is hard to forget, particularly, the big speech he gave at the end of Kill Bill Vol. 2, a clip of which is included below: 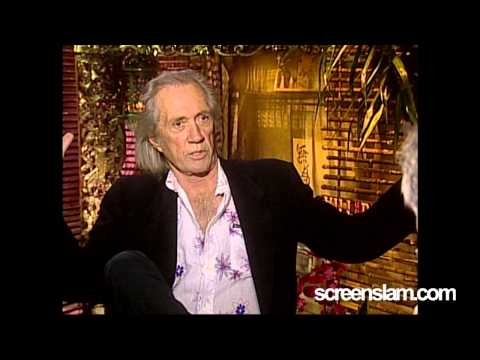 Fortunately for us all, we will be seeing a lot more of Carradine over the next few months, as he finished up small parts in six films.  The projects were not likely to generate much buzz before this tragedy, but hopefully, now they will so people will go out and enjoy some of his last works.  At this tragic time, my thoughts are with all those who knew and loved him, and I sincerely hope that people choose to celebrate his life at this time instead of being hung up on his bizarre passing.

David Carradine – one of my favorite actors – you will be missed.

The Foot Fist Way - DVD Re-View
Feige speaks on the future of Ma...